It was a long shot.  A journey to London had discovered Auntie Phylis’s will from 1980.  Could it be that those named as executors were alive, well and living at the same address as 30 years ago?  If so would they have any photographs, or knowledge of the missing family postcards?

A quick search of 192.com showed that amazingly both executors – Dennis Reyolds and Ronald Hatton were both still living at the same address.  The website also usefully listed their phone numbers.

It must be odd receiving a call out of the blue from someone you don’t know talking about your family history.  After an explanation of who I was and why I was calling Dennis put me on to his wife, Margaret as “…she’ll be the one you want to talk to”.

Margaret thought that her daughter may have some of the photographs, but that she didn’t have anything.  However, her sister Joan, may know more as she was the one who helped clear out Phylis’s house when she died.

Margaret was right.  Joan did know a lot more.

Gertie had the family bible (I wonder if that still exists – need to ring Martyn and find out).  But Joan still does have a number of family items – including  photos of her grandparents  (Alfred and Alice Hill) – one with Alice sat on a chair wearing a long dress with Alfred standing protectively near her; another had the some of the family standing outside Greyfields, Kinver: grandmother and children, one of whom Joan assumes was her father, although she’s not sure which one.

Joan also had a medal which had been awarded to Auntie May from Dodford school for 100% attendance over a whole year.

She remembered Walter (“…a miserable bugger”) but had no idea that he’d had an illicit child.  There was someone else in the family who was never mentioned.  I wonder what his ‘crime’ had been?

Other gossip included Phylis being very friendly with Alfie Burford, a relationship her mother discouraged.  After Uncle Oliver died she became very close to him again.

Joan wanted to know if it was true there were any canal boat people in her family.  I confirmed this and talked about the Dyers.  Apparently Margaret her sister is quite horrified at this – being of the view that canal workers were like water gypsies!

Did I know if Alice had a brother, Floyd, who was a blacksmith at Burcot?  I’ve not heard of this before but it will be worth looking into.

Then, intriguingly, she said something along the lines of there was a “Hill” who worked at Pipers Hill farm and a rich man called Vernon.  Auntie May had said that they were related.  This is the first family mention I’ve had of the Vernon link, although Steve Winall and Wendy Walmsley have long thought there was a link.  I must follow this up.

When the house was cleared out some of the things, including a few postcards, were given to Joan’s niece, Margaret’s daughter.  Joan said she would get in touch and get back to me and we thought it would be a good idea to meet up and share resources.

When researching the Hill family 1891 Census entry at Greyfields, where Alfred was a bailiff, I noticed that also living there at the time was a Game Keeper.  The led me to look back a page to see if there was anyone else living there at the time.  There wasn’t, but to my surprise there was my Meredith relatives living in Compton Road.  Edward and Ada must surely have know each other.  Perhaps they were even at school together?  I wonder how I could find out. 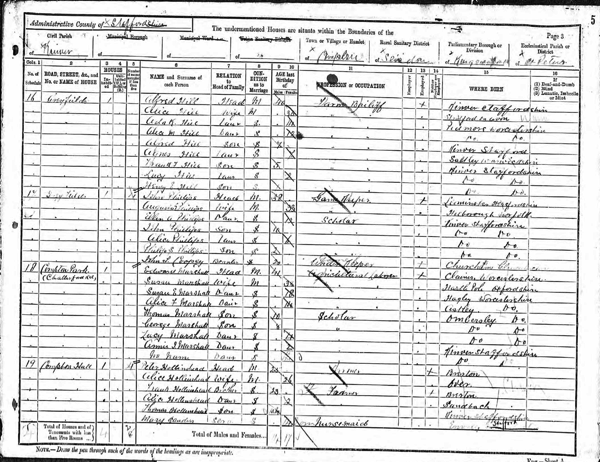 Interestingly, as the families lived here in 1891, they must surely have been scandalised by the Wolverley Murder!